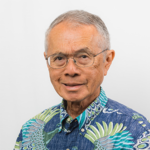 Ronald N.S. Ho was selected as the recipient of the 2018 HCES Lifetime Achievement Award.

Ron received his BSEE degree in 1967 and an MSEE in 1968, both from the University of Hawai‘i. He is still a licensed electrical and mechanical engineer in the State of Hawai‘i.